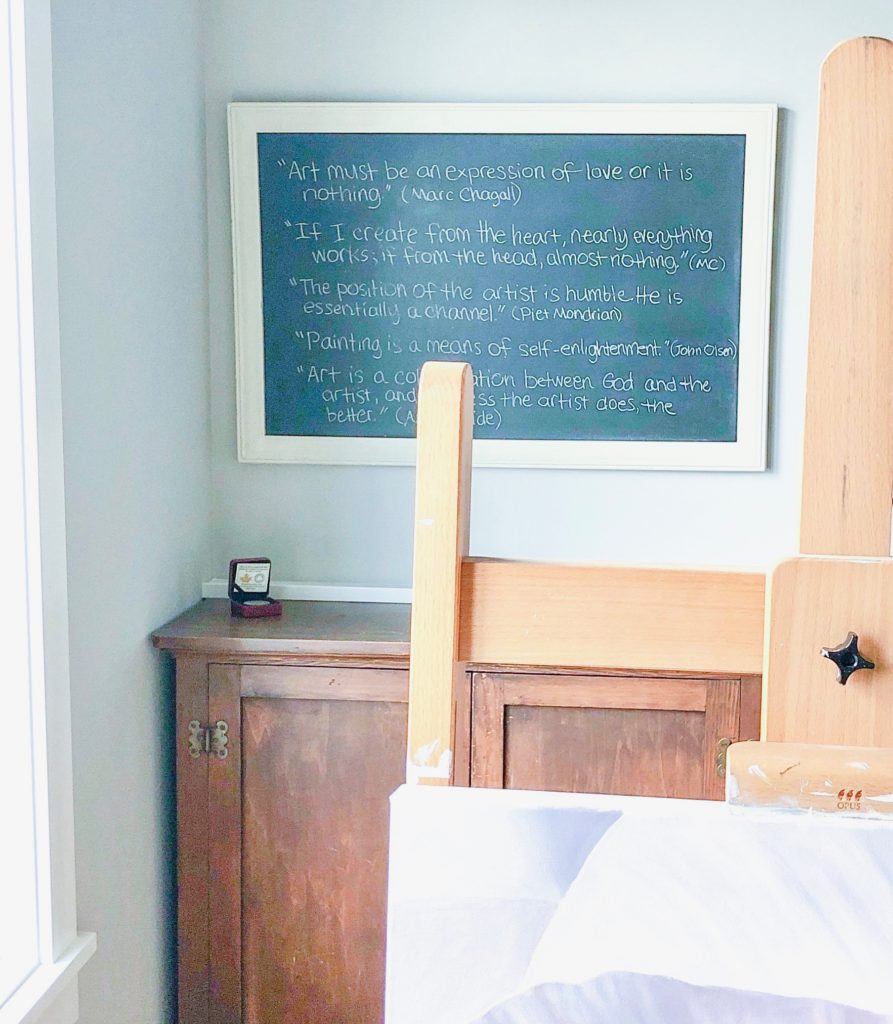 While 2015 was a successful year in my art career, it was actually 2014 that was most memorable for me. In that first week of January, a Vancouver gallery invited me to be part of an exhibit in May; Arabella Magazine asked to feature my work in their special Love of Flowers edition; and Canada Post contacted me to submit two paintings to be considered for their 2015 Flower Series stamps. Then in May, the Royal Canadian Mint reached out to me to design a $20 collector’s coin. In June, I was informed I received both National commissions.

People regularly ask me what the secret is to my success, and I often find myself giving them the “cocktail party” answer: I worked hard; I got lucky. It seems this is what most people want to hear – that I worked hard, so therefore I deserve the success. But while working hard was part of it, it’s not the whole story.

I am going to share with you what I consider to be the true secret to my success, and it’s likely not going to be what you expect. It involves pivotal moments in my life – one of which happened on November 28th, 2004 and changed everything for me and my family – but let me start at the beginning.

When I was seven I drew a tree. Not a typical seven-year-old stick figure tree, but rather a drawing that looked like an actual tree, and I got a lot of attention from that drawing. Enough so, that from that day forward, I started to tell myself a story: “I am a good artist.” That story eventually morphed and by the time I was 8 or 9, it became, “I am a great artist, and I am going to be famous one day.”

I know that one of the secrets to my success is that I never doubt the stories I tell myself. My question to you would be: what stories do you tell yourself? From what I can gather, the stories most people tell themselves about themselves are negative: I’m no good at art. I’m not very lucky. I can’t draw. I don’t sleep well. I have a terrible sense of direction. I get sick a lot. I can’t sing. I always pick the wrong partners, and so on.

I will ask you again: what stories do you tell yourself about yourself? Being aware of these stories and changing them from negative to positive is a giant step toward success. I have always told myself positive stories and fully believed them, and that is the first, and probably the most important reason I’ve experienced success.

One day when I was fourteen, my mom – who was going through a challenging time in her life – looked at me and unexpectedly asked, “Laurie, why is it that you always get everything you want?” Without hesitation, I responded, “Because I never see the obstacles.” My response had an enormous impact on my mom because it was the first time she became aware that she always saw the obstacles. So, my question to you would be, “What obstacles do you see in your life?” Not seeing obstacles is the second key to my success.

If you are familiar with Jim Carrey’s 2014 university commencement speech, you will be aware of the idea that we don’t ask the Universe enough for what we want. So, just like Jim Carrey, I will say to you, “Ask the Universe!” What do you want to cultivate in your life and what is holding you back? It’s never too late to begin this way of thinking, so why not start today? This is the third key to my success. I have never been afraid to ask the Universe for whatever I want. As outrageous as some of my ideas and wants have been over the years, so far, they have all come true. So, I’m saying, “Ask!”

The fourth key to my success is giving up attachment to how what I ask the Universe for plays out in my life. Sometimes life throws challenges, and accepting these challenges as simply part of the plan is a key. This brings us to November 28th, 2004 when life threw me a big challenge. I was a happily married 42-year-old mother of two pre-teens. I hadn’t given up on my dream of being a well-known artist, but I had allowed my busy life to get in the way, believing I had plenty of time to get back to my studio. Well, the Universe clearly had a different plan for me. Remember, I had asked to be a successful artist but I wasn’t putting in the required work.

When my children left for school that day I was their strong, healthy, vibrant mother, but when they returned home later that afternoon I was an unwell, incapable invalid lying in bed — somewhere I would remain for many weeks. I had experienced Sudden Sensorineural Hearing Loss, losing all of my hearing and balance on my left side. I was bedridden with severe spinning vertigo and even had to be carried to the bathroom for the first couple weeks. I had also developed loud tinnitus in my ear, which remains with me today.

During that time, I could only lie completely still because if I moved even an inch, the vertigo would start again. I had no quality of life and didn’t know if I would recover. The doctors couldn’t give me hope, because I only had a one in three chance of full recovery. If I had known that I would ultimately be fine, it would have been more bearable, but at the time no one could promise me that.

I reached a low point at about the three-week mark and no longer wanted to live if that was what my life was to be like. I remember listening to my family downstairs having dinner. I could hear them talking; I longed to be with them but was too unwell. Deciding a bath might help, I tediously made my way to the bathroom — every step and movement bringing on vertigo — and managed to get into a bath.

With tears trailing down my face, I said to myself, I can’t live like this. I just can’t do this anymore. Suddenly, a loud voice said, “There is no need to worry; everything will be alright.” I was so startled, I quickly sat upright causing vertigo. I had clearly heard a voice, and it was promising me hope. I chose to believe that voice, whatever its origin. Was it the voice of the Universe, God, Holy Spirit or Love? I have no idea, but it doesn’t matter. What mattered was I believed it. I trusted it. I felt hope.

I slowly stepped out of the bath, found a tiny scrap of paper and wrote it down: “There is no need to worry. Everything will be alright.” I kept that piece of paper with me for the next eighteen months, which was how long it took until the good days in a week started to outnumber the bad. And slowly over time I healed, with my brain accommodating to my new reality. My hearing never returned, but I eventually re-gained most of my balance. I learned to ride a bike again, to ski again, to paint again. I learned to live again.

One day about six weeks into my recovery, my mother was sitting across the room from me. I had my eyes closed with my head against a pillow. She said, “Laurie, I think that in the long run this experience will be good for you.” Without, moving or opening my eyes, I simply folded in all my fingers except the middle one. She and I still laugh about that; but, my mom was right.

Here is the valuable lesson I learned from that experience. There is something out there that is greater than us. Nobody knows for sure what it is, but I know we need to learn to connect to it somehow. Lying in my sickbed gave me time, and I connected to it. Once I was able to read again, I pursued a spiritual path and learned something that has served me well for fifteen years.

Every emotion we feel is either love or fear.  Doubting yourself, not trusting, seeing the obstacles, worry, regret – these negative emotions are all fear. Believing in yourself, trusting, not seeing the obstacles, acceptance, giving, kindness – these positive emotions are all love. We have free will and we have a choice, and we need to learn to choose love. Learning to connect, trust and choose love is the fifth secret to my success.

I hadn’t been working toward my goal, so the Universe gave me a nudge, which I needed at that time. I promised myself from my sickbed that when I recovered I would return to painting and would take my work into a gallery when I was well enough. I am now represented by three galleries and to date have sold several hundred paintings. I have had a successful solo art show, won awards, and through my art have raised thousands of dollars, which I donated to cancer research this year.

So, the “cocktail party” answer that my success is just hard work and luck isn’t the full story. The secret to my success is this: I tell myself a positive story, I believe it so fully that I refuse to see the obstacles, I’m not afraid to ask the Universe for what I want, I show up and do the work but give up any attachment to how it plays out in my life, I accept the challenges as part of the plan, I make a connection to my Higher Power, and I trust and choose love instead of fear.

Every time I sit down to paint, I read these five quotes written on a chalkboard in my studio:

“Art must be an expression of love or it is nothing.” (Marc Chagall)

“If I create from the heart, nearly everything works; if from the head, almost nothing.” (Marc Chagall)

“The position of the artist is humble. He is essentially a channel.” (Piet Mondrian)

“Painting is a means of self-enlightenment.” (John Olsen)

“Art is a collaboration between God and the artist, and the less the artist does, the better.” (André Gide)

I turn it over, I make that connection, and I trust.

I will leave you with the words of Jim Carrey: “You are ready and able to do beautiful things in this world, and after you walk through those doors today (or when you paint today or when you simply live your life today), you will only ever have two choices, love or fear. Choose love and don’t ever let fear turn you against your playful heart.”